There was no possibility of taking a walk that day. We had been wandering, indeed, in the leafless shrubbery an hour in the morning;  but since dinner (Mrs. Reed, when there was no company, dined early) the cold winter wind had brought with it clouds so sombre, and a rain so penetrating, that further out-door exercise was now out of the  question.

I was glad of it: I never liked long walks, especially on chilly  afternoons: dreadful to me was the coming home in the raw twilight,  with nipped fingers and toes, and a heart saddened by the chidings of  Bessie, the nurse, and humbled by the consciousness of my physical  inferiority to Eliza, John, and Georgiana Reed.

The said Eliza, John, and Georgiana were now clustered round their mama in the drawing-room: she lay reclined on a sofa by the fireside, and with her darlings about her (forthe time neither quarrelling nor crying) looked perfectly happy. Me, she had dispensed from joining the group; saying, ‘She regretted to beunder the necessity of keeping me at a distance; but that until she heard from Bessie, and could discover by her own observation, that I was endeavoring in good earnest to acquire a more sociable and childlike disposition, a more attractive and sprightly manner- something lighter, franker, more natural, as it were- she really must exclude me from privileges intended only for
contented, happy, little children.’ ‘What does Bessie say I have done?’ I asked.

‘Jane, I don’t like cavillers or questioners; besides, there is something truly forbidding in a child taking up her elders in that manner. Be seated somewhere; and until you can speak pleasantly, remain silent.’ A breakfast-room adjoined the drawing-room, I slipped in there. It contained a bookcase: I soon possessed myself of a volume, taking care that it should be one stored with pictures. I mounted into the window- seat: gathering up my feet, I sat cross-legged, like a Turk; and, having drawn the red moreen curtain nearly close, I was shrined in double retirement. 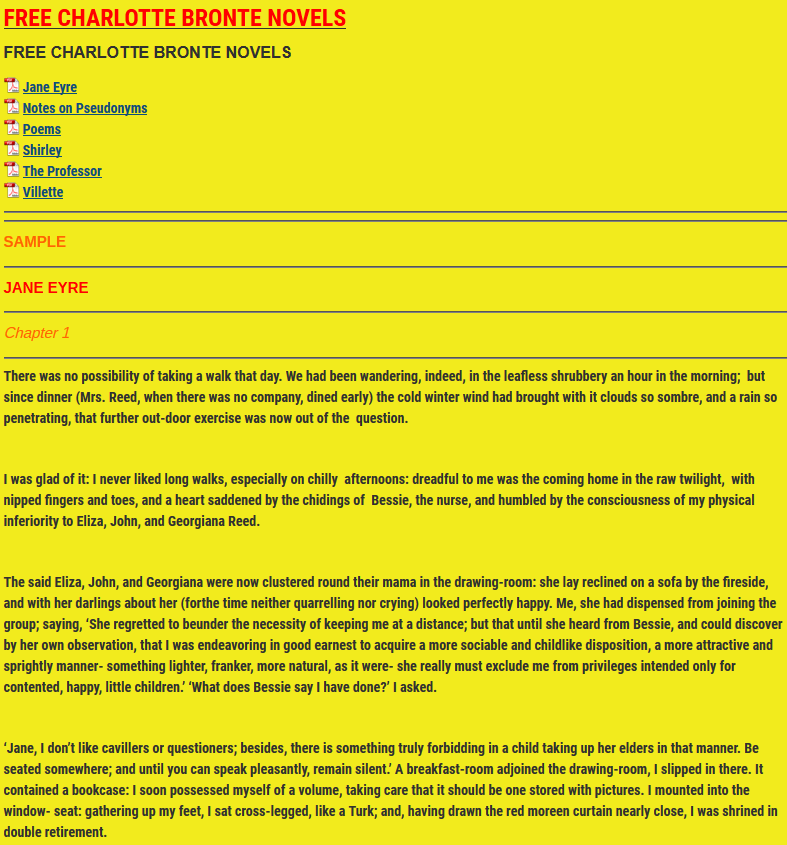